You have probably heard of this city from the movie “Fargo.” It shows how the central northern US looks like in winter. But you will never feel it until you live in Fargo.

The winter is long here. The first snow comes to the city in October. The last snow usually comes in April. Every year, we have several winter storms. They usually last for one or two days, bringing ten to thirty inches of snow.  Students like this kind of weather because the school will be canceled.

We suffered from our first winter last year. That was unforgettable. The weather became so cold in late September. While the campus was still green, the first snow arrived. I have very little memory of autumn. It feels like the summer in Fargo was followed by winter. Then the world became white and all the colors suddenly disappeared.

When a winter storm approaches, we have to stay at home before it stops. The wind speed can reach 50 miles per hour and the temperature drops to forty-degree below zero Fahrenheit. No cars can move because of the accumulation of snow. To keep the roads and highway clear of snow, snow plowing trucks were running around. The areas that were not cleaned would become the desert of snow. All parked vehicles were buried. 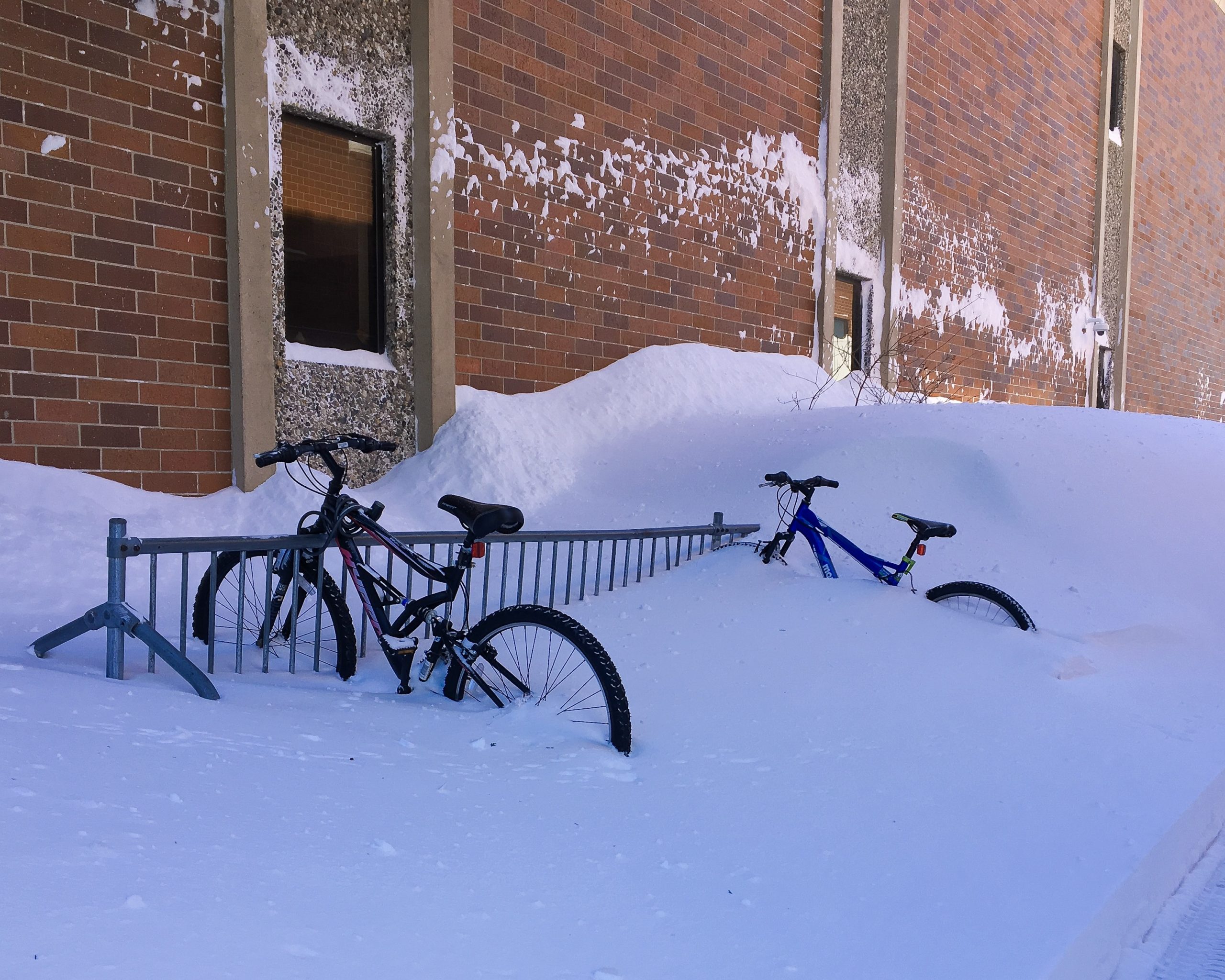 When the snow stops, the city comes back to life. Snow removal workers come to our parking lot to clean most parts of it. They use snow blowers to blow the snow off the sidewalk. Then someone drives wheel loaders to push the snow to the lawn. They usually do the job the night before the work day. The bumbling sound and beeps of equipment come from everywhere in the community. If we parked our car on the roadside, the workers could clean the parking space very easily. Otherwise, they will skip the areas around the car. In this case, we have to dig our car out with hand tools. First, I have to shovel a way so that we can get close to the car. Then we open the door and pick the tools we need. I use a snow brush or ice scraper to remove the snow on top. Just like cutting a birthday cake, I cut my tool into the snow and push a small part to the ground as it is so thick. Since we covered the windshield with a cloth protector, it doesn’t take too much time on the windshield. After cleaning the roof and engine hood, we start to shovel the space so that we can drive out. It was tough work. One-third of the car was buried in snow. It took me about half an hour to move hundreds of pounds of snow. Finally, we could leave the parking lot. 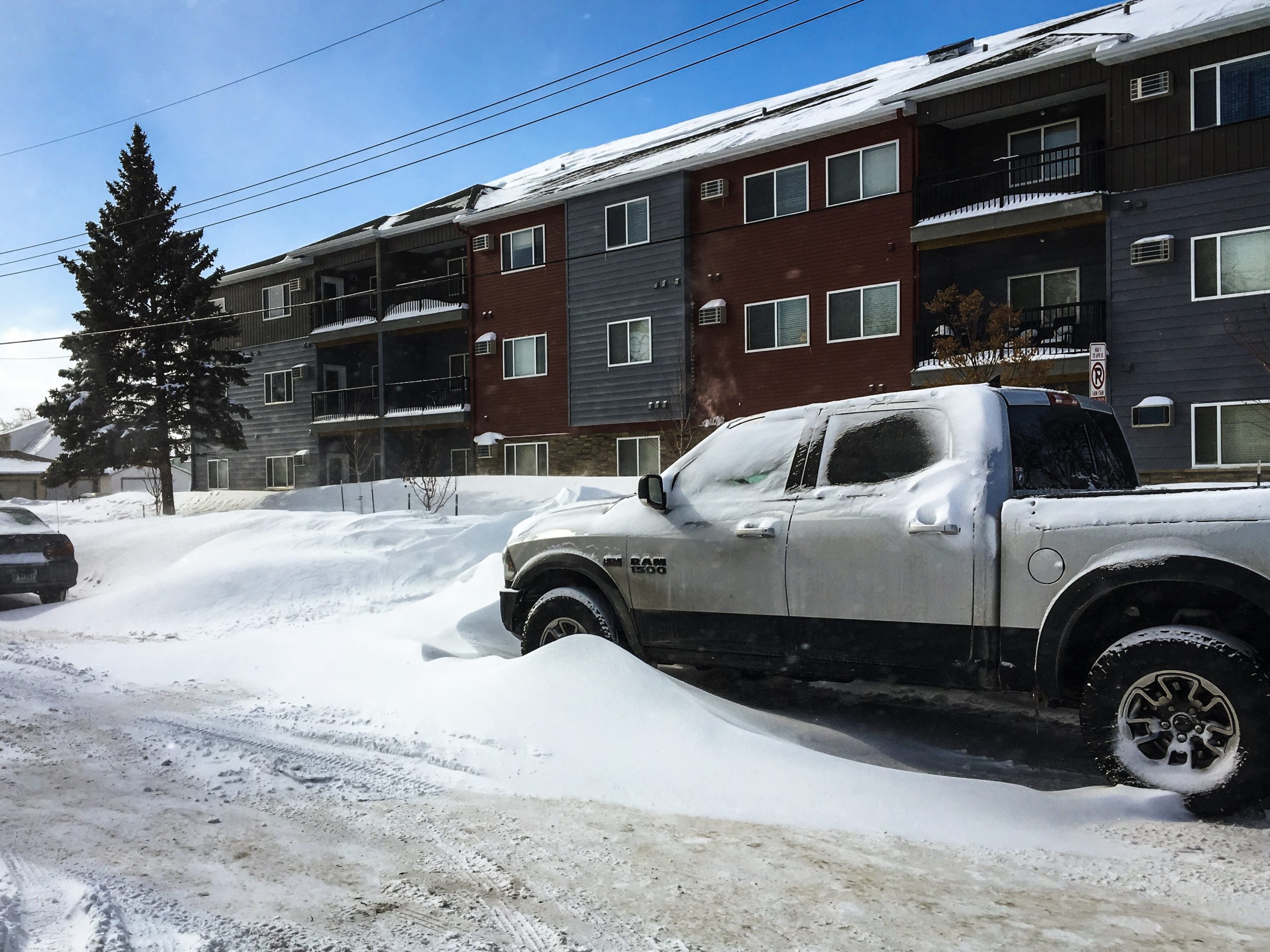 After the city worker cleaned the roads, only a thin layer of snow remained. Some areas showed concrete surface. Snow was piled up on both sides of the road. It was dangerous to drive now not only because of the slippery ground but also of the endless snow drifts. At the intersections, it was difficult to see the crossing traffic. For a smaller car like ours, it was worse. So, we had to drive very carefully. When the sun came out, the world was lit up. The sun shone on the snow, reflecting on my face, I could barely see the distance.

Several days after the snow storm, people still dealt with the aftermath. Some areas did not have enough space for piling up snow. Snow removal companies came in to transport snow to other places. Not far away from our apartment there was an empty space, as big as two soccer fields. It’s one of the destinations for the snow in this city. The trucks unloaded snow to this area.  Bulldozers helped push it together. Gradually, a four stories tall white hill was formed. Then people put dark dirt on the surface of the hill to absorb heat from the light. The sun would do the rest of the work. In the coming April, the temperature rises up. The snow starts melting. Usually, the snow hill will melt away in the sun in more than a month.

That was our first winter in Fargo in 2018. It was also the coldest winter we have gone through. Minus 30 F was normal. A blizzard at the end of January brought a wind with the speed of 45 miles per hour and a wind chill temperature of minus 61 F. I was kidding with my wife: “you see, we are experiencing the weather in Antarctica.” Our car battery did not survive that winter. We have to jumpstart the car every morning, sometimes on the road before the intersection. When I took down the battery from the car, I noticed that it had become an ice block.

But we still had some fun in such an extreme weather.  We went outside the building and pour some hot water into the cold air. Since the water temperature changed so rapidly, most of the water vaporized immediately and became icy cloud. During that winter, such activities are so popular across the north US. 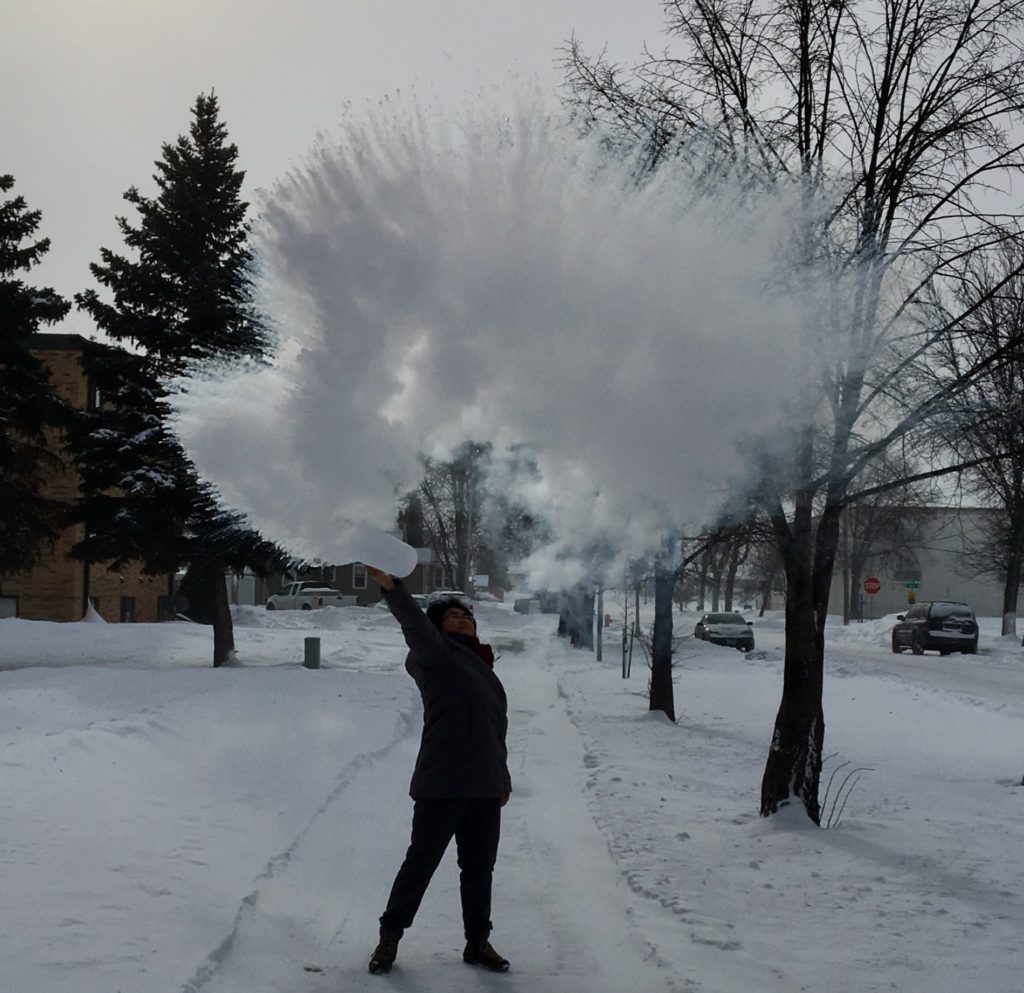 When the sky cleared up, a large amount of ice crystals floated in the atmosphere, we could see the sundog. The sun was enclosed by a huge halo. Two spots of light emerged on both sides of the halo. They were almost as bright as the sun. When I saw one of the spots through my window for the first time, I thought it was the sun.

Another fascinating thing we did is to explore the lawn behind our apartment, which was fully covered by snow. In winter, we mainly have winds from north. The snow slowed down and was accumulated on the south side of the building. After couple of storms, we could barely see the window of the ground floor. One day, when passed by, we decided to walk into the lawn and measure the thickness of the snow with our legs. For the first several feet, the snow was knee-high. When we kept going forward, it became more difficult to make the steps. Because our legs were fully buried by the snow and my feet did not even reach the ground.

In April, Spring finally came. The weather became warmer. Snow starts melting, followed by flood. The Red River, the largest river in North Dakota, runs by Fargo towards the south, separating it from another town. In warm area, the water produced by snowmelt can be absorbed by the soil. But in the Red River’s upstream, the ground remains frozen in this season. As a result, all the water gathers in the river. When it arrives Fargo, the water level raised by dozens of feet higher than other seasons. In 2009, the floor level reached forty-one feet, which was the worst flood in the city’s history. People in Fargo have been battling this situation for more than a hundred years. Every March, volunteers prepare millions of sand bags in Fargo Doom, the largest in-door stadium of the city. Then, they placed sand bags along the river in the threatened area to protect the local property. This is one of the major events every year in the city.